General information about the mosaics

Mosaics before conservation, on the wall of the Manglerud school

The mosaics date from 1963 – 70 and are labelled according to the motive they depict. Therefore, starting from the left, their titles are: Peacock (Påfugl), Playing Children (Lekende barn) and Swans (Svaner). All three mosaics are made using direct mosaic method with the use of cement based tile adhesive and no grout. The base of the mosaics ‘Peacock’ and ‘Swans’ is fiberboard 0,5 cm thick, while for the Playing Children it is QBS board 1 cm thick. The mosaic surfaces are about 2 cm smaller on each side than the board. Only on the central mosaic the tile adhesive stretches to the edges of the board. Mosaics are mounted on the wall with up to 7 screws going through the boards and into the wall. Many different materials were used in constructing these mosaics: industrial glass tiles, ceramic tiles, ceramic, porcelain, seashells, various type of stone, brick, painted lead plates and minerals.

Conservation of the mosaics

The surfaces of all three mosaics were severely covered with dirt, but also stable. Due to the uneven surface and variety of the materials used, cleaning was done mechanically with scalpel, small brushes and controlled use of water. Missing parts were reconstructed. 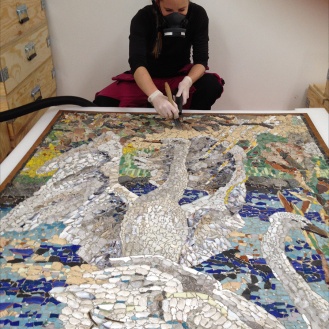 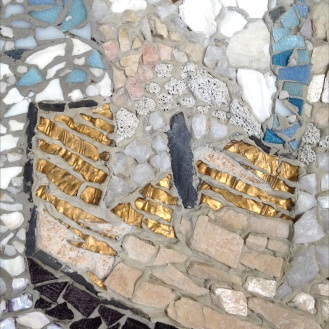 Detail of the ‘Playing Children’ mosaic before reconstruction. 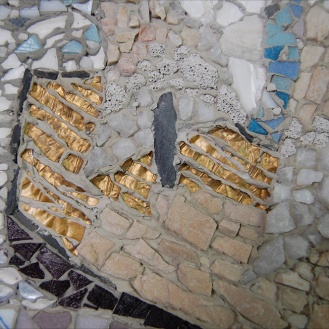 Detail of the ‘Playing Children’ mosaic after reconstruction.

Aluminium frames were made for mounting the mosaics on their original place. Each frame was custom made for it’s mosaic. Frames were used in order to stabilize the mosaics and for easier demounting in the future. They were placed in the original order, but due to the fact that the ceiling was lowered since the demounting of the mosaics, the metal sign with the artists name was removed to make space for the mosaics.
The sign was cleaned and placed on the right side of the mosaics instead of under the central one. 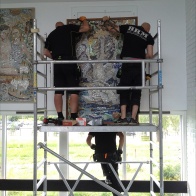 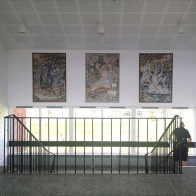 Mosaics after conservation and mounting. 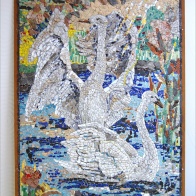 The ‘Seans’ mosaic after conservation. 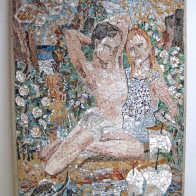 The ‘Playing Children’ mosaic after conservation. 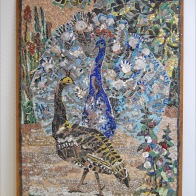