General information about R. Ydse and the mosaics

Roar Ydse was born in Trondheim in 1915, but moved to Oslo at the age of 20. He was trying to build a career as an artist meanwhile working for an advertising agency. At this stage his interest in the Norse mythology was already big and in 1947 a collection of 48 drawings were shown in Trondheim including “The ship Nagelfar goes to Vigridvollen”.
This drawing reflects on an early stage in Ragnarok which again represents the final battle according to the myths. The gods are coming in by ships to fight and eventually they kill each other. From this the new world will rise. Roar Ydse was self trained, however he studied “croquis” in Paris in 1948. He was inspired by fellow artists and friends like Jacob Weidemann and Jørleif Uthaug. In 1996 he died 80 years old.

Three mosaics were created by Roar Ydse in 1959 and were originally placed on the west wall of the Ringnes Bryggeri building. They were constructed in one piece in the artists workshop and then mounted on the brick wall.

Mosaics on its original location.

Original location of the mosaics.

The design of the central mosaic (further on referred as MOSAIC 2) represents the sun, while the mosaic on its left (further on referred as MOSAIC 3) and on its right side (further on referred as MOSAIC 1) represent wheat used in the production of beer.
The mosaics are comprised of two layers of cement based mortar on which tiles were placed with cement based adhesive. 2x2x0.5 cm glass tiles were used and they were hand cut to approximately 1x1x0.5 cm and combined with structured golden tiles (1x1x0.5 cm). Part of the Ringnes Bryggeri building where the mosaics were located was scheduled for demolition so the mosaics had to be moved in 1995 or 1996. They were cut out from the wall in one piece with their entire construction (brick, layers of cement based mortar). Two of the mosaics were then placed on the east side of the new building at Thorvald Mayers gate 4. During the process the MOSAIC 2 broke on several places. MOSAIC 3 got damaged during removal and the upper part of it was lost. Therefor it was never replaced on the new location. 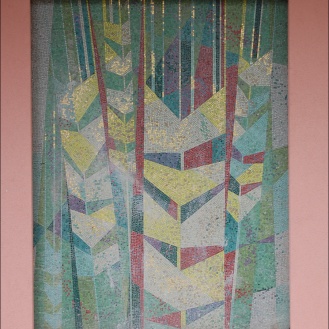 There was a crack approximately in the center of the mosaic and it was spreading trough its entire width. Tiles were missing along the crack and the adhesive has lost its binding properties which made the tiles surrounding the crack loose. Several tiles on the surface of the mosaic were damaged and crumbling. Original grout was damaged and missing
on several places. Most of the mosaics surface (especially the lower half) was covered in cement and mortar residues. Mosaic was cleaned, stabilized and reconstructed where necessary.

Cement on the surface of the mosaic.

Detail of the crack before filling and reconstruction.

After the replacement in 1995/96 the mosaic sank and approximately 5-10 cm of the lower part of the mosaic got lost in the wall construction. That can be noticed comparing the artists signature before and after relocation of the mosaic. On the upper half of the mosaic there is a square like difference in the structure compared to the rest of the surface. The first layer of mortar holding the tiles and the adhesive layer are thicker compared to the rest of the mosaic, tiles are irregularly placed and the surface is not straight. This square like difference in the mosaic’s structure is surrounded with cracks and it is both visible on the mosaics current state and on the photographs showing it at
its original location. MOSAIC 2 had visible cracks on its left half that occurred mostly during the previously mentioned remounting. Depth of the crack ranges from 1-5 cm and goes trough both of the mortar layers. Tiles were missing along the crack and the adhesive had lost it binding properties which made the tiles surrounding
the crack loose. On several places tiles were damaged and crumbling as well as the original grout. Lover half of the mosaic surface was covered in cement and mortar residues. Mosaic was cleaned, stabilized and reconstructed where necessary. 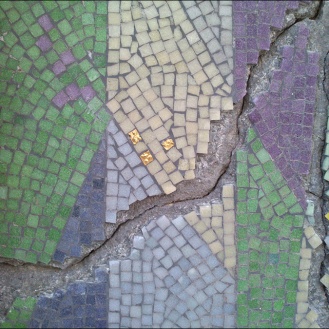 Detail of the damage on Mosaic 2. 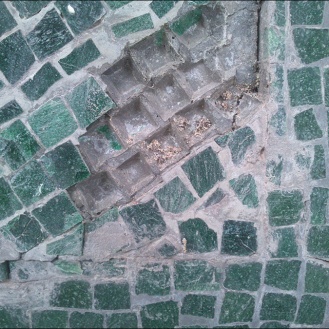 Detail of the damage.

Detail of the damage

Detail of the damage.

Drawing of the missing parts.

Original tiles from the artist himself were used for the reconstruction. Most of the colors needed were available except for the six of them.