In 2012. I was a conservator contractor for the Croatian Conservation Institute in the conservation of the memorial Ossuary in Cazma, Croatia.

The memorial ossuary was built in the 1956. by the architects Fedor Wenzler and Belizar Pahorić. The ossuary was primary decorated with deep polychrome relief (sgraffito) which represented Partisans in different scenes from World War II. Famous Croatian contemporary artist Edo Murtić renewed ossuary in the 1970’s by constructing four large mosaics which were placed on the walls of the monument. Memorial ossuary has a simple rectangular structure: it consists of four walls (7, 22 x 2, 02 m) which were placed on a pedestal built of irregular cut stones. Mosaic walls were erected 70 centimeters above the ground and pointed forward for 30 centimeters from the stone foundation. Below the wall level, there is a stairway leading to the underground room which contains memorial plaques. The roof of the ossuary is flat and covered with asphalt with tin edges. For the mosaic construction, indirect method was applied, using cement adhesive for both placing and grouting of multicolored ceramic and glass tesserae (dimensions from 1 x 1 to 2 x 4 cm). 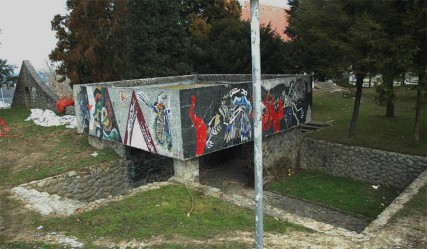 South-eastern view of the memorial ossuary before conservation

View of the memorial plaques in the underground room

Brief description of the conservation and restoration work on mosaic

The deterioration of mosaic was caused by following factors:
• Ground settlement – stone pedestal was cracked especially in the area of the stairway
• Temperature oscillations along with use of non flexible and non hydraulic cement adhesive –mosaic tesserae were cracked, crumbled and separated from the concrete base
• Damages on the roof – water leaking and moisture caused salt to accumulate on the surface and created conditions for development of fungi
• Vandalism – all four walls were covered with graffiti and had several mechanical damages.

Detail of the mosaic before conservation.

Graffiti on the surface of the mosaic. 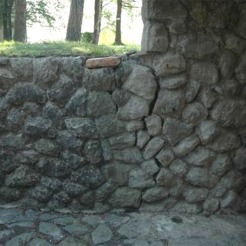 Detail of the cracked pedestal 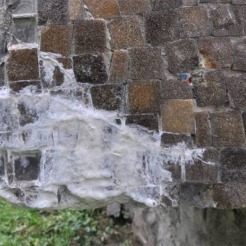 Accumulation of the calcite salts.

Graffiti’s were removed both chemically and mechanically. All damaged tesserae were mechanically removed along with the cement adhesive using hammers and chisels for
small areas and pneumatic chisel for larger ones. Edges were refined using portable hand drills with diamond attachments. Larger missing parts of mosaic were reconstructed using indirect method while the smaller ones were reconstructed directly on the site.

Chemical removal of the graffiti.

Graffiti after chemical cleaning and neutralization. 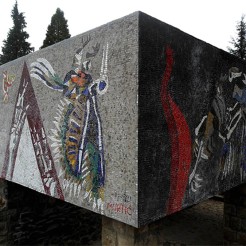 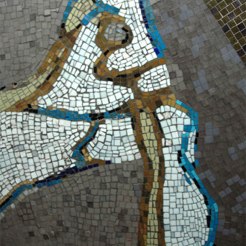