THE THERMAE COMPLEX OF THE ANCIENT ISSA

As a part of the practical work during my studies I have participated in some of the phases of conservation of the mosaic tiling in the thermae complex of the ancient Issa in the Island Vis, Croatia.

General information about the complex

The thermae complex in the ancient Issa was built in the western part of the town, about twenty meters from the sea. Archaeological excavations confirmed that the complex was first built in 1st century AD. The remnants of the walls and canals can still be seen. During the 2nd century AD the existing thermae complex was razed to the ground, and in its place a larger and much more luxurious one was built, decorated with wall paintings and mosaics. In the northeastern part of the complex, near the entrance to the thermae, there was a dressing room leading to the so called room E, which was entirely paved with a large floor mosaic with geometric shapes. Between the room E and the large hall D there is another floor mosaic with four dark blue dolphins on a compact white ground. From these rooms one could access the great central hall G whose floor mosaic contains a different geometric pattern. The hall G, on its southern side, has two steps descending to a pair of pools, with hot and cold water. Till the end of the Second World War the ruined walls of the thermae were still standing up to 3 meters high, when they were pulled down so that a maintenance shop for the allies’ military and public service vehicles, boats, etc., could be built in its place.

Eastern part of the termae complex

Conservation of mosaic tiling in the pools (1F and 2F)

The edge and base of the mosaic in the pool 1F were thoroughly cleaned of plants which have devastating impact on it. The edges of the mosaic were impregnated, joints and cracks filled and the mosaic surface mechanically cleaned.

Mosaic in the pool 2F was entirely removed from its original location. The mosaic was divided on twelve parts, following the pre-existing cracks and open joints for easier
separation, more practical handling of parts and to minimize the loss of tesserae. On the architecture of the pool fifteen points were made. These points were used to determine and draw diagonal lines (two in cross relation to each fragment) that will insure the correct return and reintegration of fragments of mosaics in the pool. Number and location of lines and dots were marked on a graph paper with drawing of mosaic in scale 1:10. Each fragment was also given its identification number. The fragments were separated from each other and rest of the mosaic and then lifted and transferred to wooden plates. 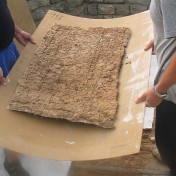 Placing the mosaic fragment on the wooden plate. 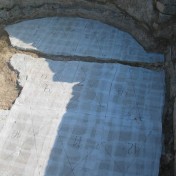 Pool F2 prepared for the lifting.

Conservation of the mosaic tiling of the room D

Here the vegetation had done considerable damage. After having removed it carefully, the consolidation of the edges and the tiling began, for which we used the standard procedures. The bordering began with the covering of the edges (and all other surfaces on which binding medium was to be applied) with an impregnating solution. By applying the binding mortar we consolidated the external edges as well as the lacunae on the inside of the mosaics. But doing only that was not enough, so it was decided to place a temporary reconstructive plaster to the areas that lack large part of mosaic.This prevented any further loss of tesserae through erosion and other processes caused by natural agents, as well as the fresh spread of weeds in the treated areas.