THE CHURCH OF ST. MARTIN

In 2010/2011 I was a conservator contractor for the Croatian Conservation Institute in the conservation of the wall paintings in The Church of St. Martin, Bicici, Croatia.

The Romanesque church of St. Martin, according to the inscription on the left inner wall, has been consecrated in the 1315. On the front of the church is a horsetail with two shafts and one bell. In the apse is preserved the throne of Christ and the archangels who
pray, and on the right inner wall of the church is a mural depicting the crucified Jesus between the three great saints.

A brief description of the conservation work

The work began in early July 2010. Fine detail cleaning started after removal of lime coating that was covering the wall paintings. Cleaning was done mechanically with scalpels with replaceable pins, glass fibers, wishab pads and soft erasers. The cellulose pulps with distilled water were used to soften the calcified parts of lime coatings which facilitated cleaning. After exposure of dedicatory crosses on the south wall, beneath layers of lime, there were Glagolitic and Latin graffiti discovered. All the graffiti were documented and translated as much as possible. The surviving paintings in the apse, the triumphal arch and the south wall were secured by injecting in order to stabilize it. As the mortar was very unstable, injecting procedure was tedious, especially on the apex of the arch where the mortar had to be supported to avoid separation and falling during injection. Tests were performed for compliance of new mortar with the original plaster. A total of 16 probes were made and the mortar that is a hue brighter than the original was chosen. After the fine cleaning and consolidation of mortar, graphic documentation of wall paintings with all its damages was made. 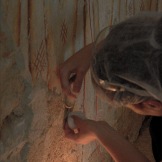 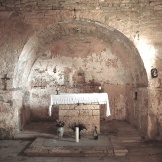 View of the sanctuary before conservation. 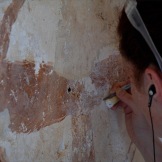 Mechanical removal of the lime coating on the dedicatory cross. 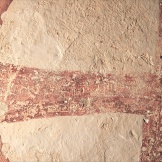 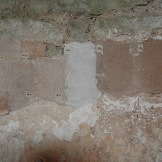 Tests of the new mortar. 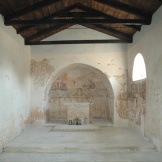