In 2010/2011 I was a conservator contractor for the Croatian Conservation Institute in the conservation of the wall paintings in the room 27 on the second floor of the head office building of the former sugar refinery ‘Rikard Bencic’, Rijeka, Croatia.

The head office building of the former sugar refinery is protected cultural heritage since 1970. Monumental palace built in 1752 for the purposes of the administration building is an integral part of an industrial complex, which testifies to the industrial development of the city of Rijeka in the 18th century.

The second floor of the palace is the most representative part of the building, with rooms, much higher than those on other floors, used by sugar refinery manager for administrative, public and private purposes. Second floor rooms are usually arched with mirror or barrel vaults, richly furnished with wall paintings and stucco decorations. There is an interesting double doors connection between the rooms. One door is positioned to the left and the second on the right side of the same wall thus resulting with emphasized circular communication through the entire second floor. Reconstruction after the great fire of the 1785th has not significantly changed the layout of rooms on second floor. Few doors were walled, new ones were opened and the dimensions of some existing doors were enlarged. Interventions that occurred during the reconstruction were mostly found in the rooms of the second floor and are less focused on the construction changes and more on “design”. This all suggests that the reconstruction primarily involved craftsmen specialized in wall paintings, stucco and other elements of interior decoration. This was necessary because of the changes made in the use of some of the rooms in the southwestern part of the floor, which were then organized as a private housing probably for refinery director Peter de Vierendeels.

A brief description of the conservation work

Conservation of wall paintings in Room 27 on the second floor of the head office building of the former sugar refinery, lasted from June 2010 to March 2011. Works that have been carried out consisted of the cleaning and removal of subsequent layers of paint and mortar, creating graphics and photo documentation and consolidation of the pigmented and mortar layers. Documentation of paintings in situ was made with the help of architectural plans with aspects of the walls. The current situation with the details of open probes was photo documented. Removing subsequent layers is performed by mechanical methods using hard scalpels and scalpels with replaceable pins. Subsequent
colored layers are thinned to the last two layers, which are carefully removed with a scalpel using magnifier with daylight lamp. Because of the sensitivity of pigmented layer the most problematic was the cleaning of panoramas that are located within the painted architecture which consists of columns, parapet zone, etc. During the removal of subsequent paint layers all subsequent mortar interventions were defined. The greatest damage to painted layer and all the original mortar layers underneath was created during the placing of electrical and other installations. Subsequent mortar and electrical cables were removed after they were documented. Original layers were preventively protected and lined with lime-sand mortar. Blown areas that were in danger of falling off were secured by injecting. Unstable parts of the paintings were fixated. After the wall paintings on the south and east wall were in large part exposed, graphic documentation of pigmented plaster and its damages started. Over the wall paintings with the help of a light thread 1×1 meter net was made which was used for the documentation. Each piece was separately photographed with a digital camera and later merged together. The views of the walls were printed out and were used to outline defects witch were later digitally processed. 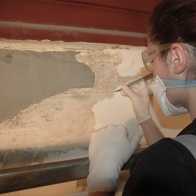 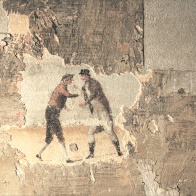 Detail of the east wall during exposure. 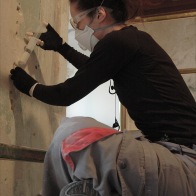 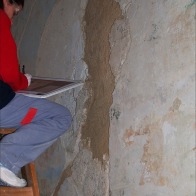 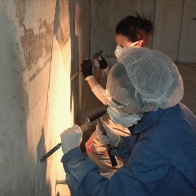